The electrification of transportation is in the process of being consolidated worldwide as one of the solutions to combat climate change and global warming. However, the popularization of electric vehicles is slowed by the absence of a charging infrastructure that meets the needs of drivers.

Unlike combustion vehicles, where refueling is done only at fuel stations, electric vehicles can be recharged at home or in places where vehicles are parked for a long period of time, such as parking lots at workplaces, shopping centers, supermarkets, gyms etc.

The flexibility to charge vehicles in different locations suggests that the problem of creating electric charging infrastructure could be solved by simply installing charging stations throughout Brazil. However, an analysis of the energy demand of these vehicles shows that the problem is not that simple.

A medium-sized electric vehicle, such as the Renault Zoe, has a battery bank with 41 KWh capacity. Low-power charging stations, which are the models often used in parking lots, have capacity around 7 to 22 KW. Thus, the full recharge of a vehicle with battery capacity equivalent to the Renault Zoe would take around 6 hours in a 7 KW station.

In addition to the delay in recharging, the demand for energy can also be quite high, especially if several recharging stations are installed in the same parking lot. This high demand would require additional investment in the electrical infrastructure of the business providing the charging station, which could make the business model economically unviable for many companies.

A solution to the problem would be to create an optimization system capable of managing the many charging stations in the parking lot, controlling the power usage of each of them in order to ensure that all connected vehicles are charged in the shortest possible interval without exceeding the power limits of the electrical installation of the parking lot.

In addition to the number of charging stations and the capacity of the electrical installation of the parking lot, the optimization algorithm can also take into account other factors that may have an influence on the charge planning of each vehicle. For example, the system could take into account the initial state of the batteries of each vehicle, the power needs according to the travel demands of each driver, the amount of time each driver is able to have their vehicle connected to the station, the load curve of the electrical installation, variations in the cost of energy etc.

The development of an algorithm capable of optimizing the charging process of several electric vehicles, in a parking lot with several charging stations, can be a rather complex challenge. Combining the practical experience of professionals focused on the topic of electric mobility to the excellence in research of the university was the path found by PUC and Venturus to answer this issue.

The students were responsible for the practical development of the thesis, conducting research, implementing algorithms, running simulations and evaluating the results. Venturus professionals contributed their expertise related to electric mobility, offering support in software development and practical guidance related to the implementation of genetic algorithms. PUC professors contributed their academic experience, bringing a scientific approach to the correct modeling of the problem and guiding students on the related literature.

To bring a more practical approach to the research, the project used the parking lot of a company as reference, using real data from the electrical network and the load profile of the company in the modeling. In addition to the limits of the company’s electrical installation, factors such as how long the vehicles would be connected to the grid and the initial state of the battery of each vehicle were also considered.

The algorithms developed aimed to ensure that all vehicles connected to the charging stations of the company’s parking lot were fully charged in the shortest possible time and within the load limits of the electrical installation.

The solution proposed by the students was based on the use of Genetic Algorithms, a computational technique for optimization inspired by Charles Darwin’s theory of Natural Selection. Similar to Darwin’s theory, this computational technique is based on creating an initial population (that is, a set of artificially generated solutions) and crossing, reproducing and mutating the individuals of this population to create better individuals, resulting in better solutions to the problem.

In the case of recharge optimization, the initial population of the algorithm corresponds to the electrical power that will be delivered by each recharge station. This population then goes through the processes of crossing, reproducing and mutating to generate new solutions, that is, new sets of values with the power of each station.

The process is repeated and validated against stopping criteria that are related to limitations of the problem and the parameters to be optimized (in this case, the recharge time and the capacity of the electrical installation). Ultimately, after several interactions, the algorithm generates a set of values that can be used to calibrate the power of each of the charging stations.

The students developed and tested three distinct genetic algorithms and ran experiments to validate the efficiency of each approach. The figure below shows the results obtained in one of the simulations that considered 12 chargers of 22 KW power.

Figure 1 shows the variation of power calculated by the algorithm for each of the charging stations over time. The power delivered to each station varies over time, reaching zero when all vehicles have been charged. 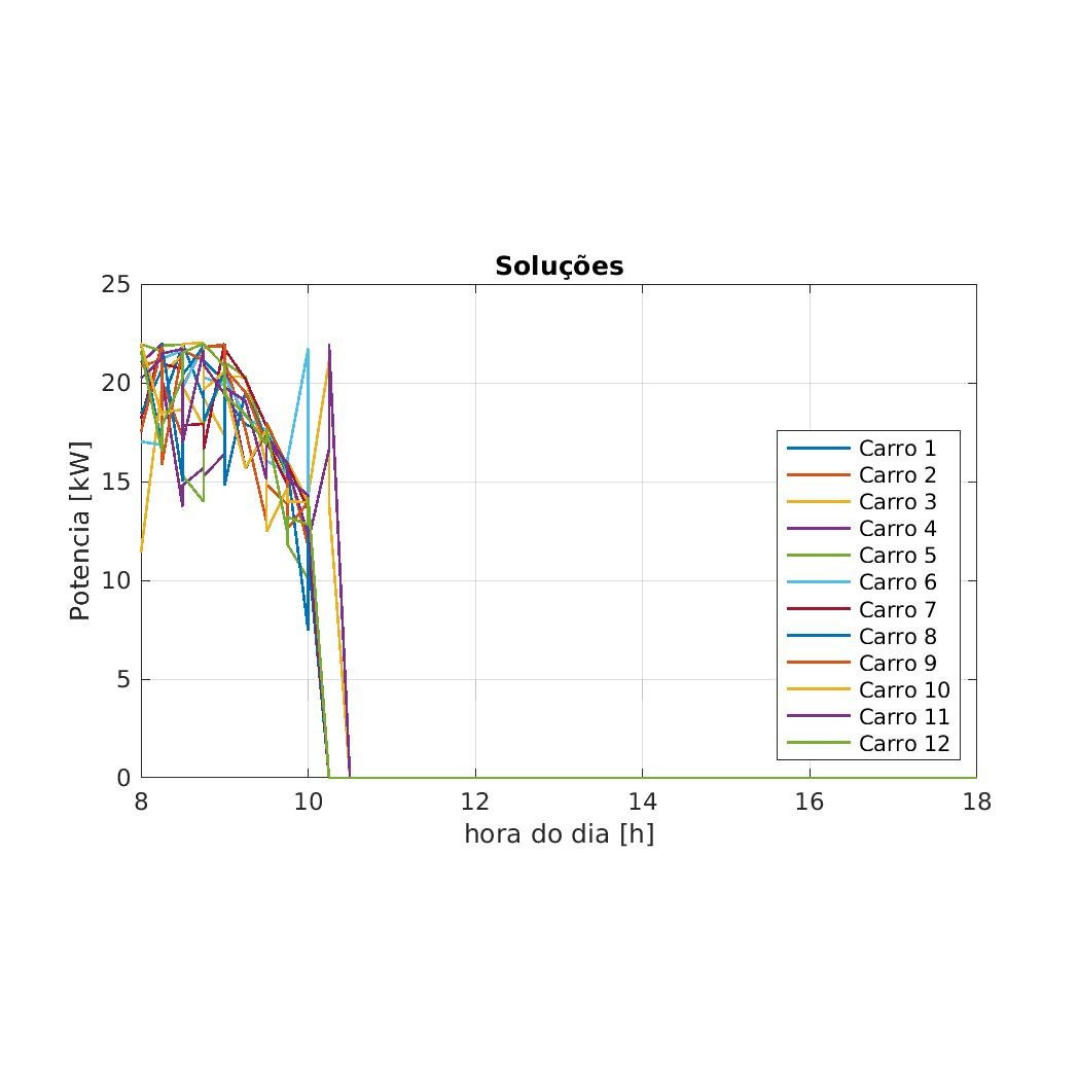 Figure 2 shows the State of Charge (SoC) of each vehicle over time. We can see that the vehicles start with in a low battery state and are fully charged after approximately 2 hours, a suitable window of time, considering that employees typically stay in the company for longer periods than this. 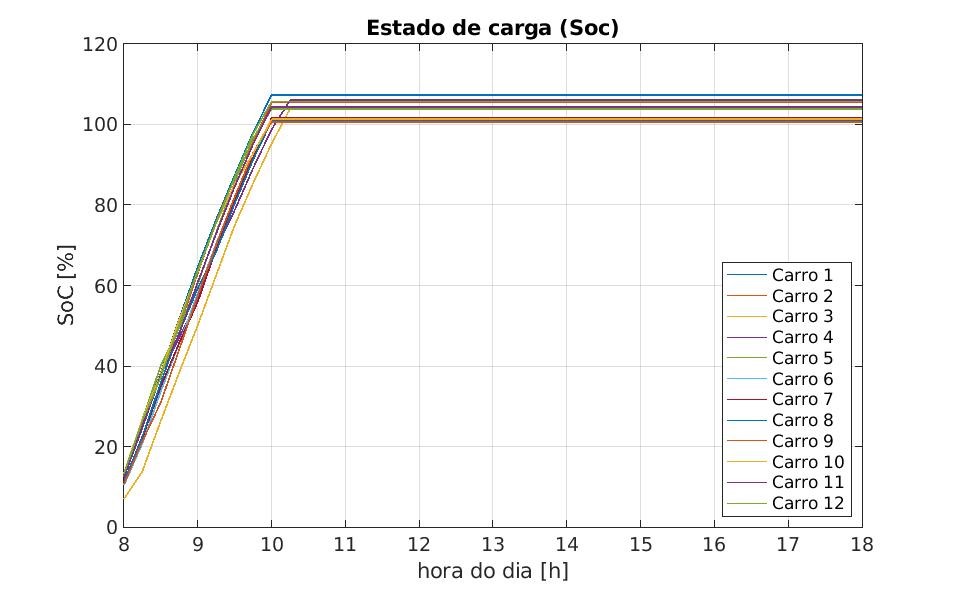 Figure 3 shows the total power usage of all charging stations (gray area) and the capacity of the company’s electrical installation (blue area). Analyzing the figure, we can see that, throughout the day, the power delivered to the vehicles (gray area) does not exceed the maximum available power (blue area), thus respecting the limits of the company’s electrical infrastructure and avoiding overloads or even additional energy costs. 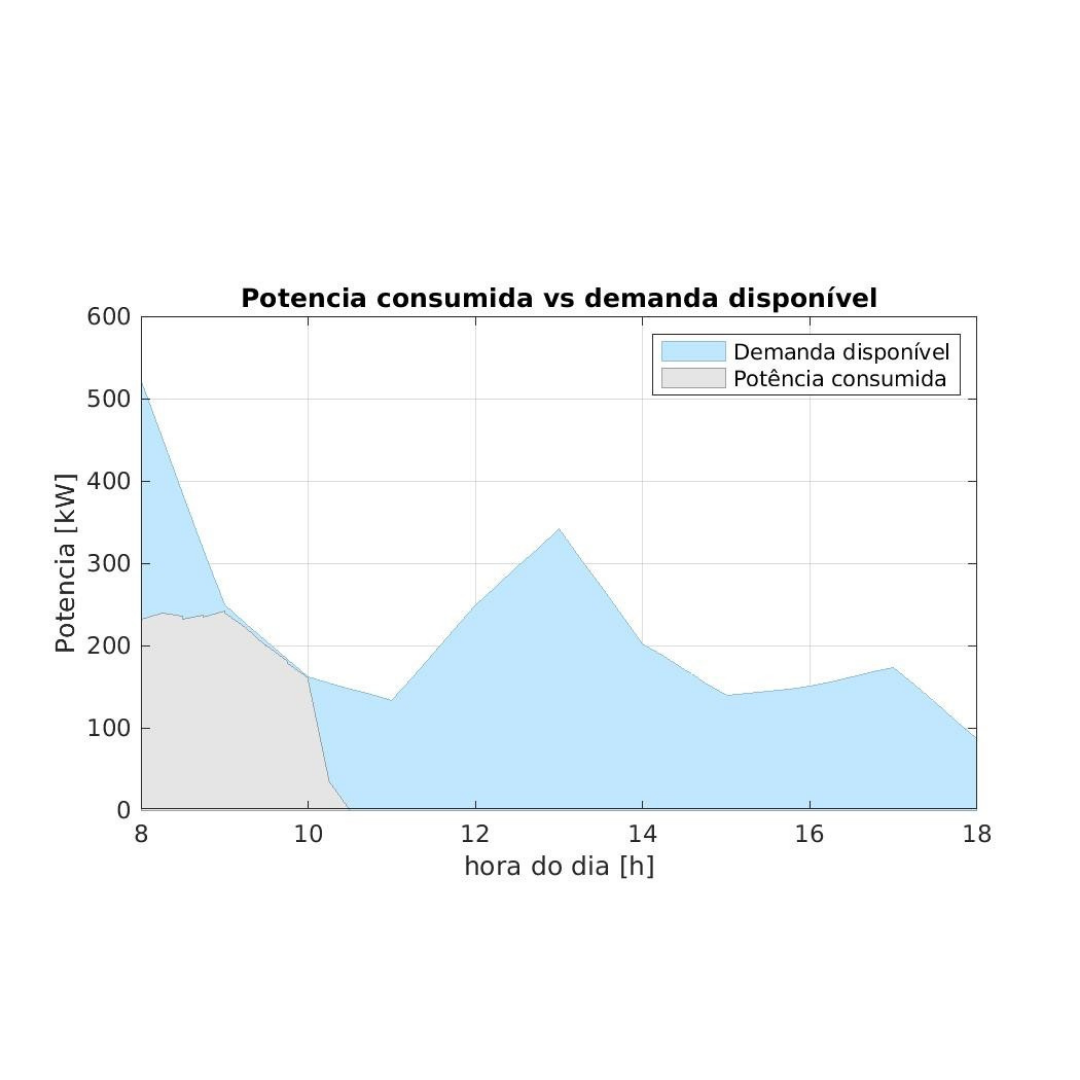 In short, the algorithm ensured the complete recharging of all vehicles in an acceptable time and within the limits of the electrical network of the business. Other analyses and simulations were performed and documented (Ref.1, Ref.2 and Ref.3) and their results also suggest that genetic algorithms may be suitable for electric vehicle charging optimization.

In addition to the direct results described above, the research brought many other finds. In the words of the students who participated in the project:

“The completion of the thesis helped me in personal and professional development and provided me with new knowledge and experiences in the area of knowledge of electric vehicles and project management. The collaboration between Venturus and PUC gave me an experience of what it is like to carry out a real project within a company.”, Gabriel.

“The thesis experience has contributed greatly to my academic knowledge. Much of the knowledge we have improved on throughout the development of the project, such as metaheuristic, programming in Python and Matlab, among other concepts.”, Bruno.

“For me, the thesis was a very intense project: I worked on it almost every day from March to November… In the beginning, Venturus helped in one of the biggest difficulties in doing a thesis, which is to define and outline its subject. In addition, the knowledge that Venturus brought to the table was also of great value and beyond what we expected. The collaboration between Venturus and PUC-Campinas was incredible because it brought the challenge of maintaining a balance between the demands of the University and the company.”, Euler.

Electric mobility will play an important role in the coming years, in humanity’s quest for a sustainable future. On this path of great opportunities, we will also have challenges to overcome. The subject of this project sought to address one of these problems.

The results show that optimization algorithms can be adopted to enable the expansion of the charging infrastructure of electric vehicles, ensuring fast recharges without exceeding the limits of the local electrical infrastructure. Future work can evolve the solutions presented, possibly generating new products for the electric mobility sector.

The project also showed that collaboration between universities, research institutes and companies can generate other results, such as networking, knowledge and experience to all involved, as well as the opportunity for students to work in a context closer to the one they will face in the labor market.

Venturus thanks PUC Campinas, especially Prof. Frank Herman Behrens and Prof. Ralph Robert Heinrich for the opportunity and cooperation in carrying out this project. We also thank Venturus employees Rhuan E. C. Costa and Lucas P. Maziero for sharing their time and knowledge to make this project possible.

We also congratulate students Bruno, Euler and Gabriel for their excellent work and wish them much success in their professional career. Hoping for new challenges to come for all of us!