Industrial robots have existed in manufacturing since the ‘70s and can nowadays be found in many industries around the planet. The typical architecture of a robot is well known: a mechanical arm with different degrees of freedom and a system of claws or actuators. The main users of this type of robotics are the automotive and electronics industries, followed by the metal, chemical, plastic and food industries. Robot manufacturers, however, serve two markets: the industrial sector and the service sector. The word “robot” is easily used in both scenarios, but their markets are distinct and have different trajectories.

The market for service robots began to take off only in recent years. Although they also serve the industrial market, the application of these robots has greater notoriety outside of the manufacturing environment, helping people rather than replacing them. Most of them are designed with the use of wheels and don’t have the necessary structure to perform heavy tasks like those existing in the industry. Here are some examples of this type of robot:

The idea of having an autonomous robot manipulating products on warehouse shelves is no longer a task of the future. This is already the reality in some companies like Amazon and its Kiva robots, as well as in Alibaba and its Quicktron robots. According to Deloitte, the expectation is that the robot market in general will reach the mark of 1 million units sold by 2020, with approximately 50% of them in service robots, which will generate more than 16 billion dollars in revenue[1]. If the forecasts are correct, this niche of service robots will surpass, in both quantity and revenue, the market of industrial robots by 2021. Not that the industrial robot sector will stop growing. It is also expected to grow by almost 10% in sales of industrial robots, reaching a revenue of 18 billion dollars in 2020.

The logistics sector is what stands out most among the consumer areas. Sales growth was 60% between 2018 and 2019, repeating the feat that year [2]. Most of these robots are installed in warehouses, hospitals and within industries for material transportation. One of the reasons for this growth is the boom of e-commerce, raising the demand for products. The possibility of online shopping and the high coverage of technology has made the retail market expand rapidly. In the same way, the technology embedded in robots has also improved, allowing an increase of efficiency in the process. Robots no longer need to follow predefined lines on the ground. Through sensors, maps and algorithms, robots can make the best route, avoiding obstacles and combining actions with new information from the process. 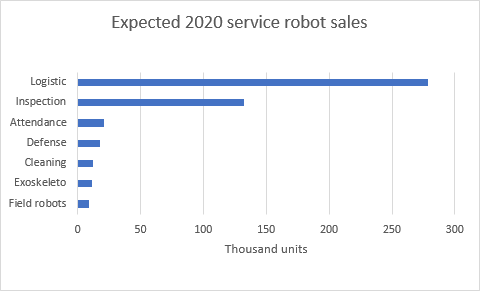 The growth rate of service robot sales has been astounding in the last 5 years, doubling the amount between 2015 and 2016 and remaining above 10% up to now. However, reaching this mark may be related to the low number of robots marketed, so that the rate has increased easily with a small number of new sales. What provided the growth of sales of this type of robots in recent years were the new technologies, which allowed reductions of costs in electronics, greater computational power and new learning frameworks. The fast advancement of software development tools and network infrastructure are allowing this growth to be intensified, according to data presented by Deloitte. In this context, there are two technologies that will further leverage the market of service robots: dedicated chips to work on the edge with artificial intelligence techniques, Wi-Fi networks 6.0 (802.11 ax) and 5G, to improve the connectivity of the network infrastructure.

Because they work on batteries, robots often have to limit their processing power, so as to stay in operation longer. The arrival of dedicated chips for AI (Artificial Intelligence) opens up a range of possibilities, as it allows computer vision and machine learning techniques to be executed locally and in real time. Ensuring connectivity with low latency and high network reliability is essential for these mobile robots. The 5G network ensures that many current infrastructure problems are solved, such as low network coverage (Wi-Fi), high latency of the 4G network (10~50ms) and low density of connections per area. The expected network latency for 5G is below 1 millisecond, with availability 99.99% of the time. In other words, 5G will allow a lot of connections, real-time responses, quality and reliability.

The promising future for robots

The market for service robots is just beginning. The dynamism of this sector represented by strong growth in recent years will continue through the technological innovations that will come. The advances being deployed by 5G and AI chips will allow a new generation of intelligent robots that are able to assist in decision making. Business leaders need to understand this market and assess the current scenario by analyzing when service robots will serve as tools for the job. 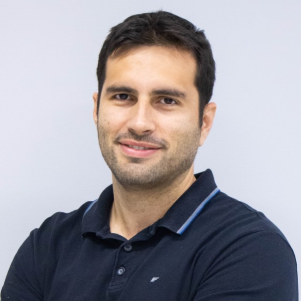